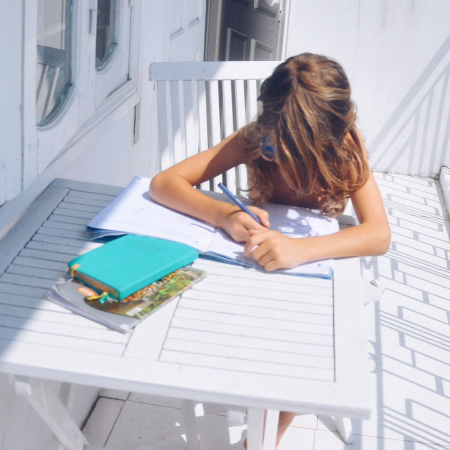 Time to brag a little. Beforehand, we were warned that we should not underestimate teaching our oldest two sons ourselves, during our journey. Especially with all the travelling, long days in buses, trains and planes and of course with taking in all the nature, culture, new surroundings (it amazes me they can find the toilet in the night), new people, new food, new smells, new humidity - in short: all the experiences and adventures we've had.

Turns out we're pretty good at maintaining a routine, it's never up for debate: every day we start with breakfast and then schoolwork - it's simple and easy as that. When we travel during weekdays, we make up for it in the weekend, otherwise we maintain a saturday and sunday off schedule. It's good to 'must do' something every day, it keeps things normal(ish), grounded and provides a frame. Without any obligations, in 'holiday-mode' so to speak, things tend to drift away from you - the less you do, the less you're likely to do. Which is fine for a two-week vacation, but not so much as a blueprint for life. Now we start our mornings with purpose and this mindset can continue throughout the day - or not, because we definitely don't go out every day. Then they can just play or swim, depending on where we are.

After three months of travelling, early december, the oldest one finished his three mathbooks already, shortly followed by his language books. A few weeks later the middle son finished his math books. My love makes the math assignments, just as attractive as in schoolbooks nowadays: with drawings and fun challenges and 3D tasks. I make the language assignments and read them demanding dictations.

After very long traveldays or real impressive natural (orang utans) or cultural (cremation on Bali) events, combined with physical exhaustion, their concentration level drops and you have to be near them, encouraging them to get it done. When we challenge them a bit and they don't get it right away, they want to give up and it feels good to help them persevere and try to build their selfesteem in this respect too. Of course it's easier for them to want to quit in front of their parents, then with their teachers, so it's extra challenging to motivate them. Most of the time, however, they get to work, usually on the bed (it's rare we stay at a place with a suitable table and chairs) and they're done in less than an hour.

Their English has skyrocketed; my love and I no longer have this language at our disposal when we wish to discuss something among ourselves. They can converse with locals and do not need translation when a guide explains us something.

Biology, history and social science present themselves naturally all the time. All the things they learn from guides during treks through jungles or national parks are priceless. Usually the guides let them feel, smell or taste as many things as possible and their knowledge about animals and their habits is remarkable. We hiked Taman Negara NP in Malaysia by ourselves, but there the trees had their names on plates, so we could tell them which ones (meranti and merbau) their grandfather used to use in his workshop. Resurfacing after snorkeling with tropical fish, a sea turtle and a large shoal of silver fish swirling around us, they exclaimed: "It's like we're in a nature documentary!" Getting up close and personal with the endangered green seaturtle laying her eggs on the beach in the night made them even more aware of the necessity of keeping our beaches, oceans and all of nature clean.

Many places we've been to, have been colonised by the Dutch or another European country and many wars have been fought and suffered, from centuries ago until rather recent (Vietnam). We didn't visit shocking venues (the caves where the Vietnamese lived for ten years and experienced extreme hardships), but we did go to some museums in different countries, where the battles are depicted as an adventure story of discoverers. Kings and gods make for fascinating tales too.

With regard to the social context of each country, just walking down the street will provide this. Beggars with limbs missing, women scouring the trash from dusk till dawn, men lending tools from one another, eating, praying, gossiping - everything happens outside, so you soon have an idea how locals interact with each other, and with foreigners. Talking to locals obviously is the best way to learn about a country and you can have fun comparing habits and traditions. It's impossible to recount all the times our boys were taught an important lifelesson. At the very beginning of our trip I thought I could keep up with everything they learnt, but I had to give that up very fast; there was just no keeping track. My oldest son still remembers the girl in Varkala, India, who told us her lifestory (which contained her mother having a tuktuk accident 8,5 months pregnant with her brother, which made the girl come back home from living with her aunt, consequently dropping out of school to help provide for her family), it made him look at her, her family and the small shop they run with different eyes. But also talking to the muslim taxidriver who is appalled by the recent tragedies in Europe and guarantees us that no mosque in Indonesia tells anyone ever that it's alright to kill. This provides for much needed perspective, in the flesh, so I'm sure it will stay with them.

Of course I wish the oldest one will realize just how many dragons he's slayed on the way, so he'll remember he can handle so much more than he thinks he can. I wish the middle one will maintain an understanding about the vastness of the world and the uniformity of people and how approachable they are, and holds on to his enthusiasm about undertaking new ventures. I wish that the youngest one will keep some of his social skills throughout his life and will never be afraid to talk to anyone, like he isn't now and that he will dive into his future headfirst, as he dives in every new sea now.

Yes, I'm proud of them and content with us; learning, experiencing, sharing and laughing together, letting life teach us meaningful lessons. 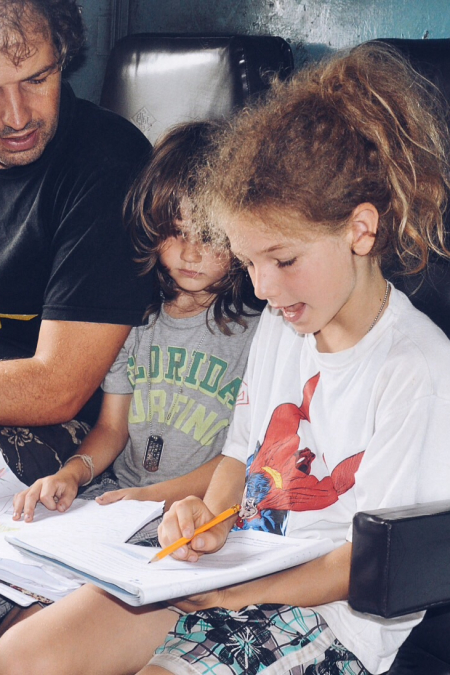 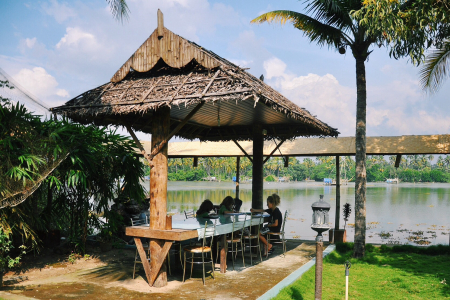