In the backseat of the bus, our behinds were in mid-air half of the time and through this bumpy road we were slung 1500 meters high and above sealevel, into Da Lat. The French colonists left their mark in this town in the mountains, but time and the Vietnamese have engulfed the chalets and European vibe. The City of Eternal Spring felt very much like summer to us, with a lovely 20 degrees. The inhabitans obviously disagreed: they are wrapped in winter wear, all the way to woollen headgear.

Driving on motorbikes through the surrounding areas we could absorb the distinctive features, passing by hilltribe women carrying their infants on their backs and admiring the hills and valleys and agriculture lands producing flowers, fruits such as strawberries and vegetables that are considered typical winter-dishes in our part of the world. Alongside the twisting roads dark coffeebeans lay spread out in the sun and we passed so many greenhouses, they seemed like entire towns on their own.

We drove through one of the evergreen forests and the scent of the pinetrees triggered memories of walking through the forest on our island Texel. We skipped the waterfall featuring a bobsled ride and found the road to the Tiger Waterfall. Clearly this was once a majestic draw, but it was now completely run down and overgrown, which entirely has its own beauty. We had the whole path, climb and waterfall to ourselves and this cascade was particularly royal.

Cruising on to Bidoup Nui Ba National Park, we stopped at the side of the road for a pho and sugarcane juice - street vendors make this sweet beverage everywhere in India and Vietnam, using a hand cranked press. We took a 3,5 kilometer walk through the densely forested highland, admiring the evergreen, woodlands, skyhigh pinetrees and fish farms. We climbed all the way up to the waterfall. On the way back my flipflop got busted and the oldest one sprained his ankle, leaving my love to function as a horse. I have to give it to him, the ground was covered in a thick carpet of needles, but he managed to be a good beast of burden, not slipping once. On the way back the sun was starting to set to the other side of the world, drawing an illuminated line around the clouds.

In the culinary department I want to share a meal with you, where they put five small bowls on plates on our tiny table, which was comletely stuffed already with plates, drinks, a bucket full of cutlery, chopsticks and napkins and baskets with baguettes. The bowls seemed to contain some lettuce and green leaves, that is, until they set fire to them! The plates under the bowls turned out to be filled with some sort of fuel. So the five of us had to eat from a half a square meter plastic table with five fire hazards on it, the children hardly able to move and forced to walk around if they'd like something from the other side of the table. I loved it. The flames licked the earthware passionately, and when they finally were extinct, it turned out that there was some delicious, now cooked meat at the bottom, under all the greens. We like ourselves to be caught off guard in the food division, the surprises are usually nice and tasty. 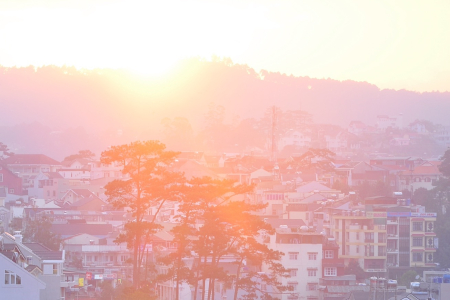 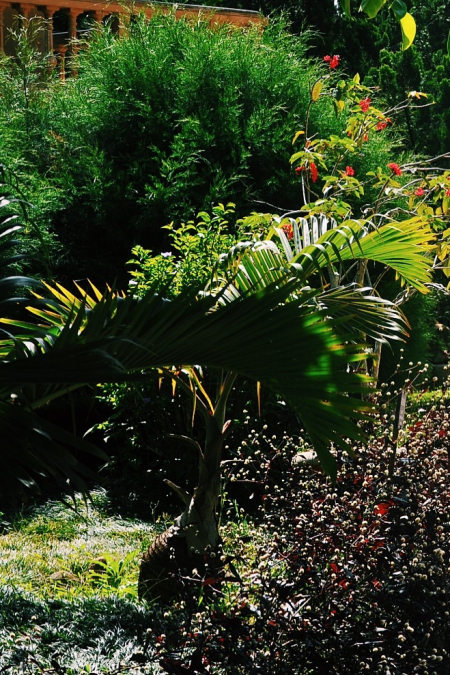 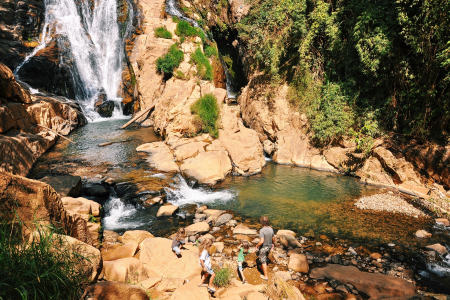