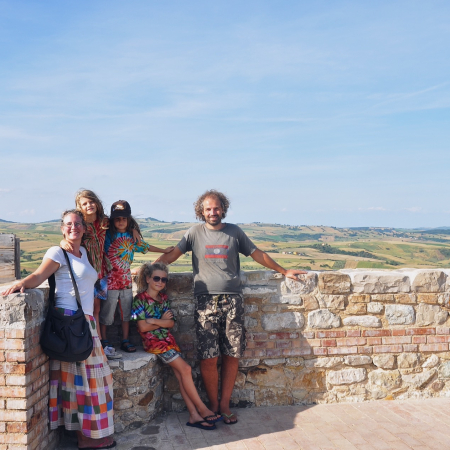 Homely bliss. This is what we experience here. No more packing and unpacking, spending hours in buses, waiting on stations, haggling, searching for affordable food and shelter. We weren't tired of Asia, but we were tired of the constant travelling, bound to leave a country before the visa date expires. Always on the move, completely uprooted - even when we'd stay somewhere for a while, 'cause you knew it'd have to end again.

Here, we sleep under a blanket, which is real nice; the fact that it's cold enough to sleep under something again. We eat at the table in the kitchen, my love whips up heavenly pastas and teaches the oldest son his cooking skills.

Calitri is a very welcoming little town, with groups of (older) men everywhere, chatting, watching, their walking-canes planted firmly between their legs to lean on. People greet each other and us, looking a little curious. When we fall into conversation, things turn funny fast: most of them don't speak a word of English, but that doesn't stop them from making sure they get their point across. There's a fruit and vegetable store across the street, where you can not pick up the goods yourself, the clerk must do this for you. Everyone waits their turn patiently, you get such good, fresh produce for cheap and when you leave the air is full of 'ciao, ciao'.

In the old town centre people put empty bottles on their doorsteps, in hopes of stopping the cats from relieving themselves there. Obituaries are put up on billboards, like a huge local newspaper, framed posters of the Virgin Mary hang on the walls of some houses.

Walking down the hill, the berms around us are buzzing with life, a variety of insects but also the snakes and lizards that scurry into the protection of the green. These berms harbour the greatest diversity in grasses, flowers, grains and plants I've ever seen and smelled.

After five days my mother arrives with the car and we celebrate the birthday of the oldest son. He'd had a lot to be nervous about lately: leaving Asia, his grandmother coming over and to cap it all, as icing on the cake, turning ten years old. Everything turned out fine though, with baking an apple pie and not much else (as he prefers it) going on, on the big day. Very nice however, to not only get a present from us, but from his nonna as well.

Every other day we go on a trip to show my mother as much as we can in ten days, so we visit the two volcanic lakes Laghi di Monticchio, the castle/museum of Melfi, obviously the old town here in Calitri, have a beach day in Maratea, explore the surroundings and play in between the fields of grain and climb to Castello Borgo. And we are invited by the family that rents us our house to come over for dinner. We thought we'd get pizza, since we knew they have a wood oven, but what they served us exceeded our wildest expectations. We started with spaghetti with some prosciutto on the side, followed by the tenderest meat with the tastiest potatoes, with homemade pizza on the side (!!), leaving very little room for the dessert of peanuts and pears. But it was the improvised communication (Angelo and Google Translate to the rescue) and exchange of goodwill that really turned this in a night to remember.

Driving through the surrounding areas, the world appears to me as a Land of Mountains, with their charming towns on their backs, flaunting softly waving golden fields of wheat, allowing us to drive through their right eye, many a time, providing us with a shortcut. Hay bales are left scattered as if the giants were interrupted in playing a marble game.

When we approach the coast, a big, indigo veil around them reveils itself. First we drive down roads of tagliatelli, draped down their flanks, then they become even narrower, like twisting spaghetti and we see a blue scarf, softly rippling, caressing the mountains. Small rocks surface here and there, to assure us that they are in fact still there, as far as our eyes can see.

Our routine most of the days: breakfast, schoolwork, play, lunch. Take the car down the mountain, we've discovered some delightful spots where we can laze around, playing catch with ball or frisbee, read a little, write some, draw a bit, surrounded by grains, flowers, butterflies and bees. Go explore between the hay bales, lifting ladybugs on higher grass stalks, so they won't get trampled. Peel the shells off the peanuts as a picknick. I have absolutely nothing else to wish for. 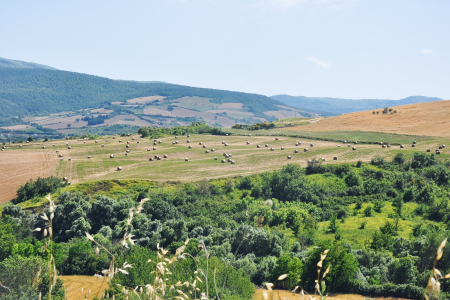 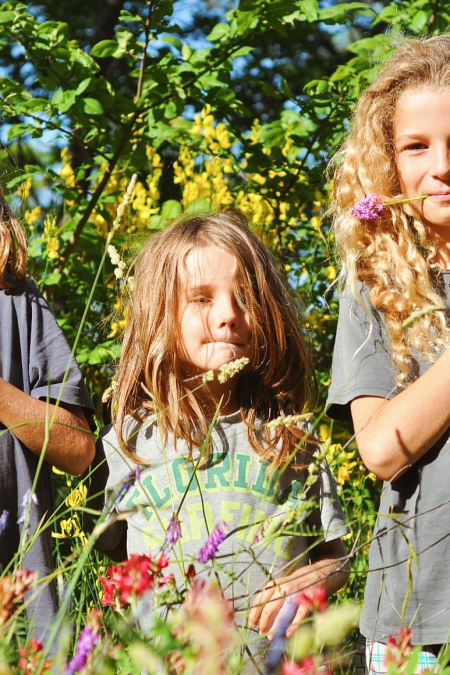 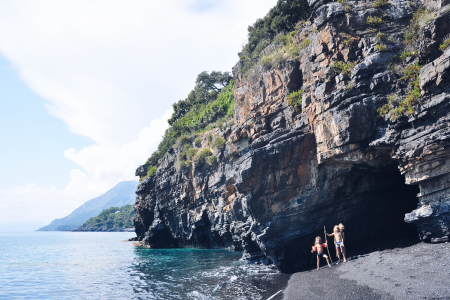