So much blue, from sky and sea, is so liberating; I think I know why. Someone with blue eyes has so little pigment that the irises are actually transparent. It is of course the same with the sky and the ocean. On the one hand our brain finds it very pleasant to see a color, so that we know we are enclosed, but subconsciously we know that we are actually staring into the big nothing and that gives an incredibly grand sense of space and freedom.

Because no smartphone is or ever was in my possession, we mostly discovered this little island just how I like it: spontaneously. By scooter. The signs are mostly in Greek, I have no natural GPS in my head ánd I have no navigation device; sometimes annoying, but mostly we love exploring places this way. Plus I got to ask for directions and a sweet old man in a pick-up truck made clear I should follow him and drove 30 km/hr ahead of me for quite a stretch to point me in the right direction. Getting lost was always a good thing: lighting a candle in pretty churches, enjoying unexpected beaches; we always made the most of this time adrift, until we’d find our way again.

We were going for a quiet beach day, but ended up (yes, by accident, because of my navigating skills) in Plaka, where we climbed to the highest spot: Kastro, the old town of Milos. From here you can overlook pretty much the entire island and the calm, blue water surrounding it, including the old windmills, standing out like saltcellars on the kitchen counter. Then we found Mandrakia and decided to go for a swim there. It's a cute fishing village, with so-called 'syrmata': places to store boats, dug into the volcanic rocks, sealed with vibrant doors. You can also find these in abundance in Klima, fulfilling all your multicolored dreams.

All towns are incredibly pretty, the fishing villages especially brighten your life, the beaches all different yet all pristine. Other than that you can dive into some truly historical sights, for example the catacombs in Trypiti. They were used by the early Christians first as a burial site and later also as a place of worship and a refuge after persecution by the Romans became widespread. They are considered to be the most important early Christian monument of worship in all of Greece. No less than 300 family graves were found, they are among the three most important of the 74 discovered worldwide, together with the catacombs of Rome and the Holy Land.

From te catacombs we walked to an ancient theatre and passed the spot where the famous Venus de Milo was found - created sometime between 130 and 100 BC, the statue is believed to depict Aphrodite, the Greek goddess of love and beauty. Currently on permanent display at the Louvre In Paris. Pretty impressive for such a modest little island.

A bit more on the variety of beaches: my boy’s favorite was Papafragas, by a long shot. Let me tell you: the tiny path down got the adrenaline up. I’m not exaggerating when I call this beach inaccessible, yet we went there twice - as per my son’s request. This rectangular-shaped cove, surrounded by tall cliffs and deep, dark sea caves, makes for a truly spectacular landscape. It resembles a huge natural swimming pool. You just have to be willing to descend the narrow, steep path down, preferably on your bum, to the tiny strip of sand that forms the beach.

Seems the Miloans like a bit of a challenge when it comes to going to the beach; we basically rappelled down at Tsigrado, but the dive into the most dazzling, almost blinding blue water was worth it.

And then there’s Sarakiniko: an unreal, moonscape beach a few minutes from our place. Truly out of this world. Waves driven by north winds have shaped the greyish-white volcanic rock into amazing shapes. It leaves you wandering in awe, after which you can earth yourself again with a fresh dive.

Oh and there’s Pollonia, where you can eat seaside only, Firopotamos where we set our record of beachtennis between its authentic syrmata and you have to go to Paliochori, with its coastline full of smooth, yellow and orange pebbles, where we chilled in the shade of the high, pink volcanic rock, had the best meals with an appetite stimulant view and admired a school of flying fish during a swim.

Our neighbouring settlement, Agios Konstantinos, just around the corner of our place, combined it all: syrmata, beach and to top it off two churches plús a tiny church in a cave serve only a handful of houses.

I’ll stop now, suffice to say: every patch of sand on Milos is attractive and you can have a different beach experience every day.

About ‘capital’ Plaka: it’s just as quaint and small as the other villages and even here there are no streetnames, so we had to just ask around to find the teeny Sand Museum, with the most enthusiastic and generous owner, very nice for any 8 year old. We promised him we'll send him sand from our island, to add to his wonderful collection!

I wouldn't say Adamas is the most picturesque of the villages, but it was where we did our first grocery shopping and it became our fall back place. We were always happy to see it in the distance, knowing that we could find our way around this lively port. Also there: the Milos Mining Museum, real educational, after our visit we drove to a real life mine.

The beauty of this island is, that it’s all a short scooterdrive away and believe me: riding to your ‘home’ from any direction, with the setting sun turning all the vegetation even more golden than usual and the soft seabreeze stroking your naked arms and legs, leaves you feeling completely blissed out. 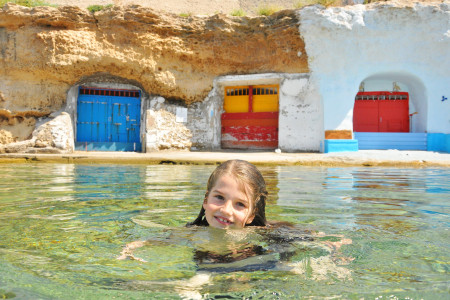 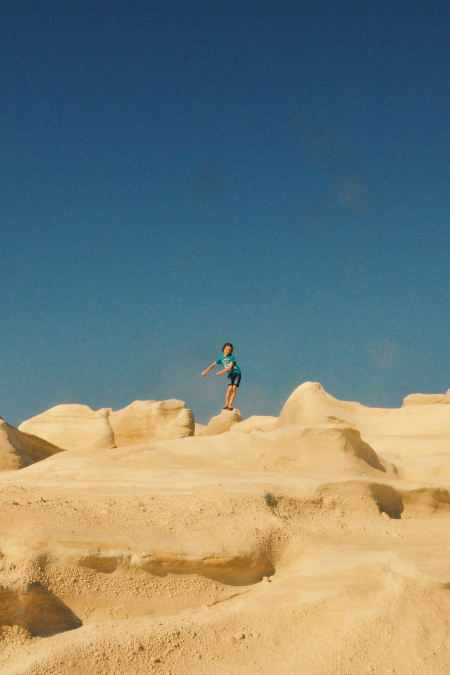 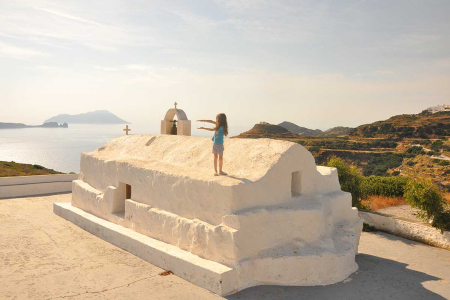