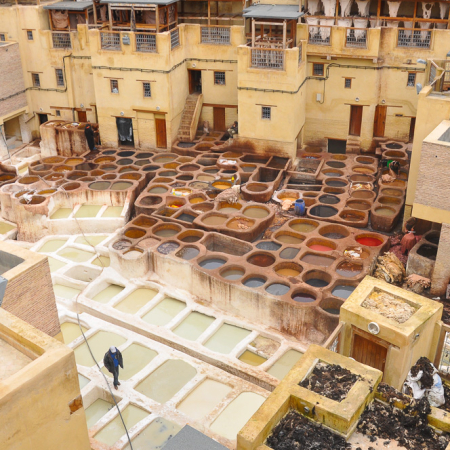 You can read about our first five days in Casablanca, Chefchaouen and Meknes here.

From Meknes we took the train to Fez. We walked through the citygate Bab Boujloud: blue on the outside, green on the inside, leading into the old medina; Fes el Bali. The narrow streets and alleyways are tremendously busy, especially the quantity of tourists is striking.

At the riad we booked a guide and Mohammed not only took us on a three hour walk through the 9400 passageways of the old city centre, but also told us a lot about the Islam and what it's like to be Muslim in Morocco. About the Five Pillars of his religion and how he incorporates these into his daily life. Most impressive to me is the zakāt or alms-giving: the practice of charitable giving based on accumulated wealth, which is obligatory for all Muslims who are able to do so. Very much needed in a country with so many beggars and unfortunate people. Also, he was very proud of the fact that so many muezzins perform the call to prayer five times a day: "no cassette tapes in Morocco!"

He told us about the faraan; the communal oven, located in practically each street where everybody comes to bake their goods. We passed private graveyards, which are impossible to detect behind these giant doors; truly hidden gems, as I've mentioned before. He let us peek through the entries of mosques where men were praying. We walked through alleys with colored agave (a cactus) silk hanging from the frontage of the buildings, where men dyed clothes completely black. We wandered through markets, by tiny schools, by the vocational school for carpenters, where all things 'wedding' were crafted. On to the tannery Sidi Moussa, where we learned that these family businesses are now corporations supported by the government. The whole process is explained and of course we get a tour along all the products. Forward we went, by the Karaouiyne Mosque and University: again, grandeur concealed within the swarming of everyday life. We visited the weavers, where it felt like stepping into a rainbow, with colors so bright it makes you squint a little. We entered the madrasa (Quran school / university) of Mesbahiya where we stared in awe at the detail overload. We tried to knot a tiny piece of a huge carpet, which is incredibly difficult, yet these girls move their fingers so fast you can barely see the thread being knotted and snatched off. The craft is taught from mother to daughter, including the designs, which are nowhere on paper, just in the heads of these young women. Depending on the kind of pattern it takes several girls several weeks to completely finish one carpet. After buying argan oil, tea and black anise at a pharmacy, we walked the twisting streets back to our riad. It's a good thing this 1200-year­-old medina supposedly is the world’s largest car-­free urban area.

Our heads were spinning, so many impressions; we immersed ourselves completely into all artisanal industries Fez so abundantly offers.

We eat at a small eatery by the street, across from the butchers, watching the perpetual pandemonium go by and dig in some minced meat kebab and chicken, plus a local treat: pastilla - Moroccan pigeon pie!

When we take the train to Marrakech the next morning, the station gets flooded with young football supporters without money for a ticket, trying to catch a ride to an important match. Alas, the police take their job very seriously. Almost nine hours later we've experienced Moroccan manners: people share their food in public transport. A taxi drives us to the edge of the medina, it's a crazy, bumpy ride. With the help of the gps on the phone we find our accommodation, here it's called a dar (riad is Arabic for garden, dar means house). Completely different yet so very beautiful again. We eat on the roof terrace of the madrasa nearby.

The next morning we submerge ourselves in the Marrakech Mayhem: total chaos washes over us, especially the many motorcycles make walking the medina a risky endeavour. We admire the splendour of Palace Bahia, walk to Bab Agnaou, meanwhile being treated to spectacular views of the snowcapped Atlas mountains; very surreal to see these from a busy city's point of view. After a quick bite we stroll to Palace el Badii, impressive ruines. We cross the large Jemaa el Fna square, full of stalls, snake charmers and women painting henna under green parasols. Via the Ben Youssef mosque we go to the Medersa Ben Youssef the old university / Quran school, which we admire extensively, we roamed around the tiny rooms for the hundreds of students. 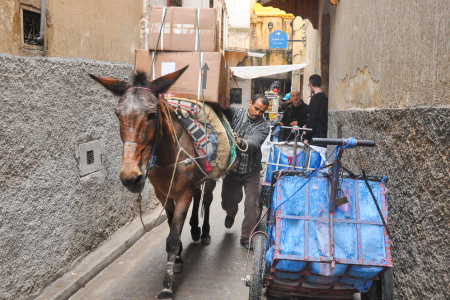 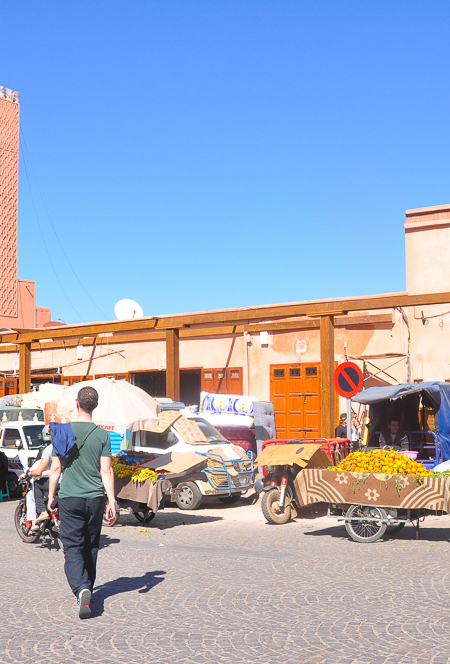 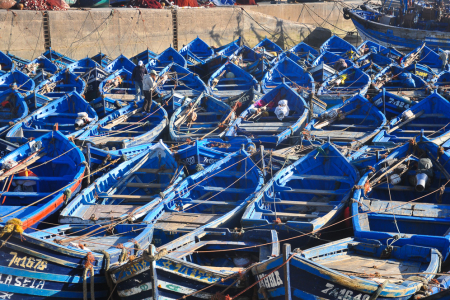