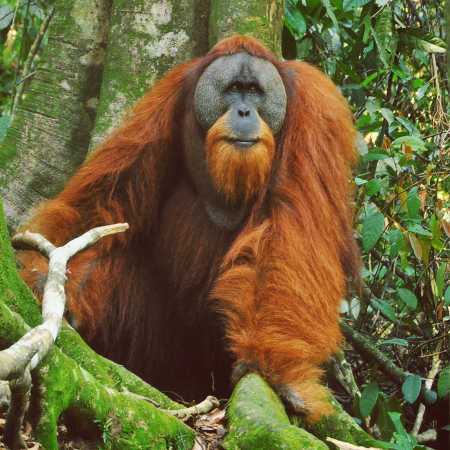 You'd think we're seasoned travellers by now, who've mastered the whole airport routine, nonchalantly going through the motions. However, we seemed to be amateurs trying to get through customs in Medan: first I started walking through the metal detector with my bag still on my shoulder, and then no less than four of our bags contained 'weapons': a bread knife in my love's duffle bag, a toy gun in the youngest son's backpack, a pocket knife the middle son forgot to remove from his backpack and a tiny saw (?) in the backpack of our oldest son. Man, we must have been sleeping, packing those bags. Lesson learned by our sad boys, leaving their precious belongings behind.

Walking through Medan it is evident that there is more poverty here - beggars with children and drunkards in the streets - than in Malaysia, Vietnam or Thailand. Food and shelter comes cheap, if you go to the right places; nasi goreng with vegetables, kroepoek and chicken balls (I assume she meant the egg) on the street costs you only 10.000 rupiah (0,60 euro).

Soon we left Medan behind to go to Bukit Lawang: a village stretched along the river, across the famous Gunung Leuser National Park. The local band was practising their rock-repertoire for their gig that night, so our boys hung out at their rehearsel most of the afternoon, the middle son seizing the opportunity to play some drums whenever the musicians would take a break.

Next morning we went on a jungle trek with a guide and two helpers. It wasn't long before we saw a young orang-utan swinging through the trees, hanging upside down from the branches while casually chewing on some leaves. The mother wasn't far away, checking on her son from a small distance. Watching these gorgeous creatures, the sunbeams lighting up their red fur, I understood why we're so in love with them. We're so much alike, we identify with them and seeing them have so much fun is like looking in a mirror at our inner child, we imagine it's us playing amongst the green leaves of ancient trees and this makes us incredibly happy.

Climbing on, we encountered the orang-utans a few more times, before stopping for lunch. Rice and fruit taste even better when you're sitting on a giant tree root after losing many liters of sweat. Clambering on, the terrain was so rough that the youngest one's legs were a bit too short to crawl the muddy and steep way. The guide and helpers took turns and gladly carried him on their shoulders (!), up and down the slippery grounds. We saw an impressive meranti lizard (he can climb up trees, for example the meranti) and didn't run into the agressive female orang-utan Minah, much to the relief of the boys. Up on a hill, all of a sudden, we faced a majestic male orang-utan - he just stood there, on the ground (they're supposed to be high up in the trees), it was such an unreal image. For a while he calmy watched us watching him, then slowly struck a pose, raising is arm, sort of alpha, but with the same gentle look in his eyes. Whenever he moved just an inch, we would all move backwards, one of the helpers carrying our youngest, just to be sure. What an extraordinary meeting. To top it off, we finished our hike by crossing the river back to our guesthouse on big tubes, the fresh, crisp water soothing our steaming bodies. 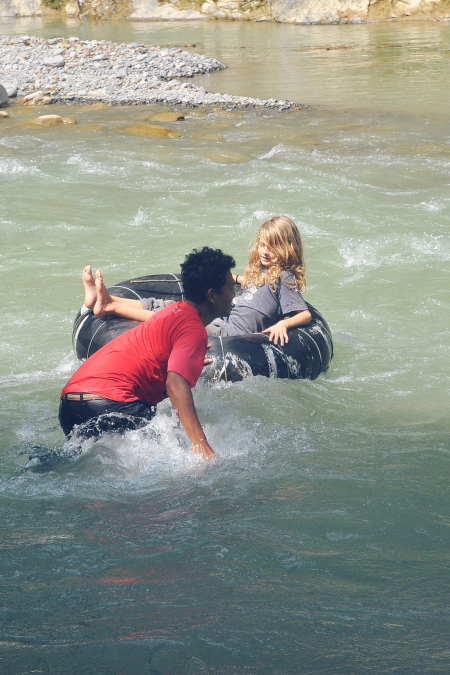