Ubud - The effect of beauty on the soul 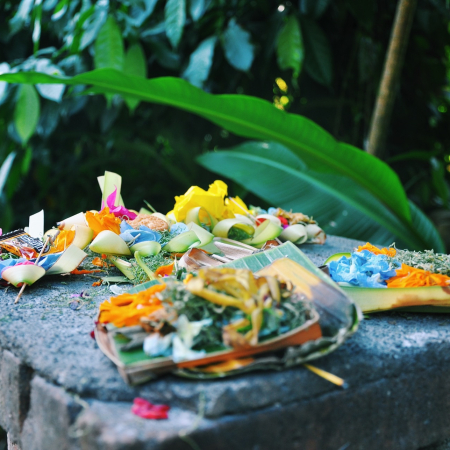 Ubud - The effect of beauty on the soul

You can not blame Bali for being crowded with tourists: there's simply too much beauty. In fact, the rise in numbers of people going to the Island of Gods made us hesitate to even come here again; we didn't want to spoil the memories of our travels here fourteen years ago. We're so glad we decided to come anyway. Being on Bali, all our further plans for Indonesia evaporated; we wouldn't go to Komodo, Lombok, the Gili islands; we would stay on Bali for the remainder of our visa.

Arriving in Denpasar we were awaited, for the first time ever, by a man holding up my name; the boys thought it was a hoot. We pre-booked the pick-up since this airport is notorious for its transport touts. While driving to Ubud, the driver told us about a special cremation ceremony for a member of the royal family, advising us to visit the Ubud Palace to see the preparations.

Then Ubud washed over us: we got an upgrade at our guesthouse to big rooms with aircon, even in the dark we could make out the beautiful dramatic sculptures scattered around the garden and walking out of the room in the morning you had to be careful not to step on the tiny offering (a square banana leaf with rice) laying beside your flipflops.

We'd assumed Ubud would be expensive and were pleasantly surprised to find this isn't the case - if you know where to go. Between all the touristic restaurants and souvenir shops you can still find a nice warung with fair prices. The many, many vegetarian meals throughout the journey were balanced out quickly by eating crazy amounts of mouth-watering ayam (chicken) sate.

Every guesthouse looks like a temple, with decorated Ganesha's at adorned gates. Holy statues hide between shops, and small offerings are placed everywhere - no thing too humble, no item too common to earn an offering. Everything deserves protection and blessings and good luck. I understand why the Balinese are keeping up these frantic rituals: it has certainly gained them a lot.

Balinese Hinduism has roots in Indian Hinduism and Buddhism, but they mix it up with lots of other things good and appealing, like animism - a worldview in which basically every element of nature possesses a spiritual essence and is therefore a potential home for spirits. The expressions of their beliefs is reminiscent to the Thai ways with Buddhism, in the sense of using offerings, flowers, foods and such to please and appease the spirits. The people carry a flower behind one ear and some grains of rice on their foreheads, not the bindi of the Indians.

Ubud is ideally centrally situated: the cultural heart of Bali, and if you take a short walk, you're immersed in green.

Finally we could take a scooter drive again, after not being allowed to in Malaysia. At first, your mind tries to grasp all it sees, attempts to hold on to every detail. But soon you realize it's too overwhelming, there's too much to process. You let all the fractions of beauty become a blur, letting all the loveliness fly by you as you race through it, so it becomes one big wrapper of glorious grace. The middle son, sitting in front of me on the scooter, exclaimed: "the world is such a beautiful place! Not just nature, but also the things men made!" It's true, the natural world and cultural decorations really complement each other perfectly here. Even when the surroundings are disorderly, the little specs of crafted offerings, adornments or flowers will brighten up the whole place. We got off the scooter many times, walking through the paddyfields, watching the locals harvest rice and tending to their animals and lands and we found shelter just in time for the expected afternoon torrential rain.

May 8 had been chosen to be the ultimate day for cremating the grandson of the king. The community had been preparing for this event for weeks, as we had witnessed the days before. An enormous amount of people worked on building the decorative funeral tower and the life sized bull sarcophagus. Standing on the side of the road with thousands of others, we watched the procession parading by, with lots of loud music and cheering for the men carrying the swaying funeral tower, with the body of the deceased high up there, in a coffin. The street turned into a river of people, every other hundred meters the heavy structures were taken over by a new crew, carrying the bull and tower running - they do this on purpose, it looks like it's about to tilt over (and it probably is), but this is to distract the evil spirits. After arriving on the cremation grounds the body was carried from the tower, lifted out of the coffin into the bull and set on fire. You could feel the vibration of accomplishment, the people looked so proud and content. Other than that it was business as usual, with women selling sari's squeezing through the crowds.

Balinese Hinduism is not only expressed in rituals throughout the day, but also in their art. It amazes me how much time they spend on both. However, the spiritual and the practical go hand in hand. Scooters need blessings too and no matter how much time they invest in conducting their rituals, they can combine holy missions with daily errants.

Actually, the whole island is one big temple. Driving or walking through these huge candi bentars (split gates) you enter a new part of it time and again. You feel surrounded by their attempt to seek balance and harmony between dharma (order in the cosmos) and adharma (disorder): it travels through the air, like the smoke of the incense sticks and the sounds of the gongs and xylophones.

If you can turn a blind eye to the garbage on the sides of the roads and ignore all the people asking for money for 'everything' (like having their picture taken, looking at paddyfields, walking on a beach) or if you need a 'taxi, maybe tomorrow', Bali still undoubtedly is the Morning of the World. 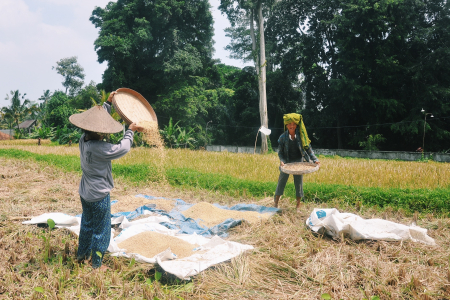 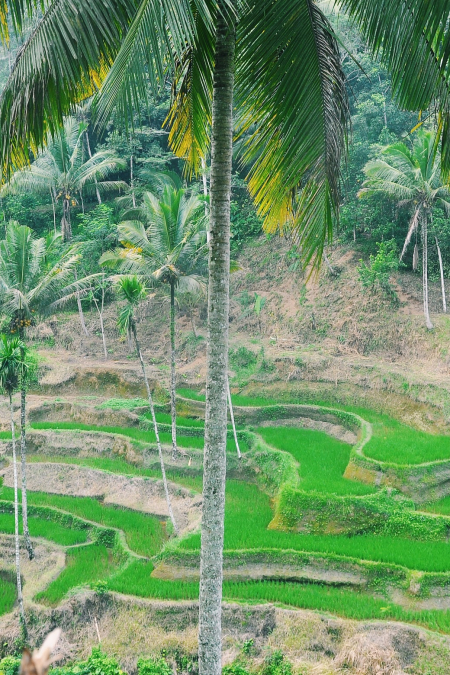 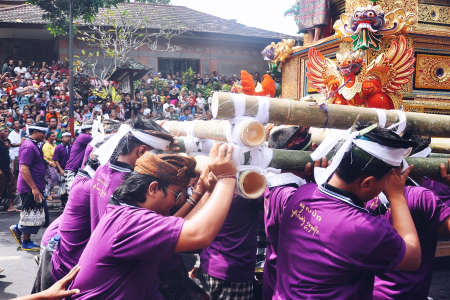