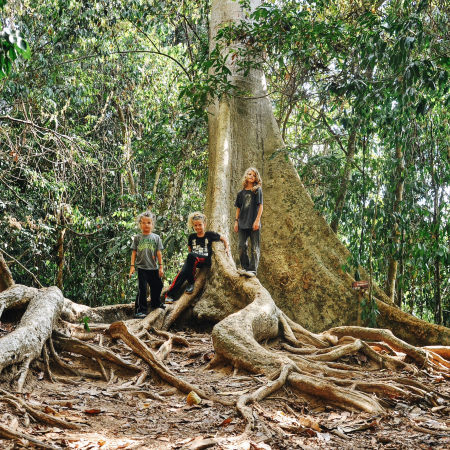 Arriving at the mainland from Pulau Kapas, we went to Kuala Terrengganu, where we enjoyed some downtime and admired Chinatown, which was real pretty, with some adorable alleys.

The journey to Jerantut was supposed to take six hours, but we ended up in different busses for ten hours. Once there, we took it easy again. One day we took the bus to Taman Negara, an immense, impenetrable jungle, the oldest rainforest in the world. We crossed the river into the park for 1 ringgit (0,22 euro) per person and paid the entrance fee for 1 ringgit p.p. as well; incredibly cheap for such a highlight. We hiked up to the canopy walk; a walkway, suspended between the huge trees, 45 meter up in the sky, for 500 meter. From behind the canopy walkway a trail led to Bukit Teresik (344 meter) which we managed to conquer and we enjoyed the view.

Next up was Melaka, but arriving in Temerloh to transfer busses, it turned out no bus was going there and it was too late to make more detours. So we went to a hotel and arranged a taxi to take us to Kuala Gandah Elephant Conservation. Seeing the young elephants in their confined outdoor residence evoked a strong emotional response with our oldest son, as well as with us. A little unsure of what to do, we bought some sugarcane to feed the elephants, we watched the show the older elephants performed, but then left, not wanting to participate in the riding or bathing of the elephants - the huge tourist pitfall all through Asia: these wild animals should not be ridden or otherwise exploited as circus animals. Of course these elephants were rescued from far worse abuse and it's understandable that the sanctuary needs money to provide for them - in short: there were a lot of pros and cons to talk about with the boys.

The following morning we took the bus to Kuala Lumpur and from there another one to Melaka.

Melaka is one of those pleasant cities to stroll through, and a Unesco World Heritage Site (just like Hoi An and Hue in Vietnam and Galle in Sri Lanka). There's the Dutch Cemetery, where 5 Dutch people and 33 British are buried (but I guess we called dibs on the name?), the Dutch Square with its extraordinary, excessive rickshaws, blasting their music and blinking their lights, from where you walk into Jonker Street with its nightmarket - almost as overwhelming and cozy as the one on Ko Samui. These markets are a feast for your eyes and nose: all kinds of unrecognisable food and otherwordly gadgets. Furthermore there are plenty of nice museums to visit, like our favourite: the marine- and naval museum (housed in a replica of a large Portugese merchant- and warfare ship), interesting churches, like St. Paul's Church with more Dutch tombstones and other things worth seeing, like 8 Heeren street, a conservation of an early (18th century) shophouse, built by the Dutch. Finishing our stay in Malaysia with lots of culture, after our sand-and-sea filled times here.

Malaysia is a fairly modern country (compared to its neighbours), so everyday life is not as controversial or startling as it was in previous countries, but the upside is that we felt very accepted and welcome. All our favourite ingredients presented themselves: tranquility, openminded attitudes, marvellous natural experiences, a lot of time being beach bums and a healthy portion of culture. 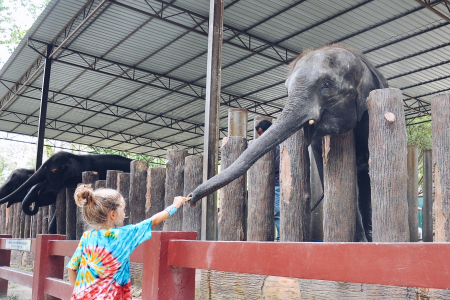 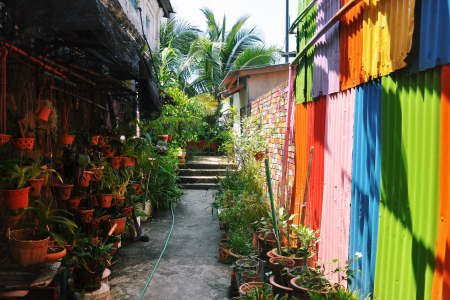