Life around the water in the Mekong Delta 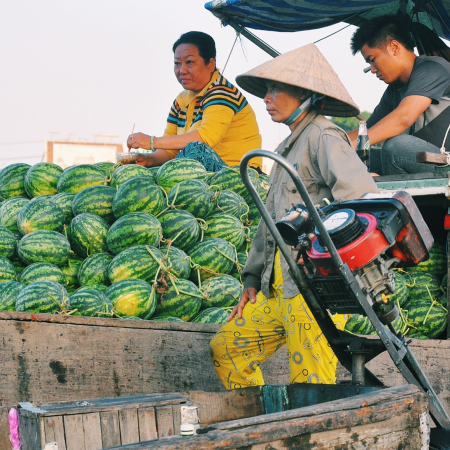 Life around the water in the Mekong Delta

Still rubbing the sleep from our eyes, we admired the rising sun from our small boat, as we purred along the Mekong river. Around us other small vessels, with traders and their goods, on their way to the Cai Rang floating market and big ships, almost succumbing to their cargo. Alongside these early birds we took in the silhouettes of palmtrees before the orange and emerald sky on the left and pile dwellings and large construction sites appearing from the dusk on the right. These stilt shacks consist of sheets of corrugated iron and wood, sometimes concrete. A lot of them have a sort of shed for their boat in front of them. Here the people live and work, there's a laborious vibe.

At 05.30 a.m. we had followed our boatswoman to the boardingplace. Our hotel is located in the middle of a mechanic market where you can buy anything and everything to do with motorised vehicles. The night had not ended yet, but the market buzzed in full swing already.

Boating through the floating market our boat operator bought fresh pineapples, large grapefruits and mangoes, which she prepared for us whilst steering; she's a very skillful captain indeed. On the boats people rest in hammocks and have built an expansion on their craft for domestic activities. We imagine they lie here on this floating market until they sell all their merchandise and then sail to farmers to resupply their stock. How often will they set foot on land? Our boatswoman doesn't speak a word of English, so we can't ask. The boat ride continued over the wide Mekong river to Phong Dien floating market and then into some smaller canals. She provided the boys with straw nón lá hats against the first rays of sun and dropped us off ashore so we could walk a while, following the canal, until she picked us up again and brought us to a nice eatery by the river for a bite and a beverage. Upon entering the boat again it had been transformed: she had put up a modest sunscreen. On the way back we got off to visit a place where they make rice noodles. So nice to have been immersed into this beautiful aquatic area.

The backwaters in Kerala, India were incredibly pretty and tranquil, here it's bursting with life and activity.

In Can Tho we discovered some new favourites on the streetfood-menus: best ones are definitely banh xeo for a quick bite and hotpot for a long family dinner! A pot filled with burning coals was placed in the hole in our table, a pan full of broth and meat put on top that. It was up to us to throw in the noodles and green leaves to shortly cook and to dip very thinly sliced beef into it for about twenty seconds for it to be ready to eat. Felt like having fondue, so cozy.

During our scooterdrive we noticed gravestones in the middle of the ricefields; one or a small group. A precious notion, people getting buried in the place they've probably spent the lion's share of their lives. A motorbike making a quacking sound rode past us; dozens of geese stuck in large bags behind and sideways of the driver, making the motorbike as wide as a van. Driving off the small ferry is a sport in itself: 10 meters before anchoring you start your engines and as soon as the ferry touches the bank you all speed off as if someone just blew a start signal.

We relished seeing every opportunity to produce seized here in the Mekong Delta, as well on the water as on the surrounding lands. 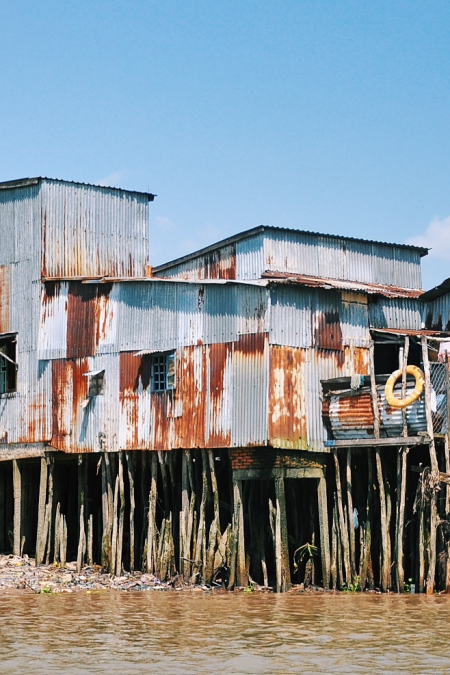 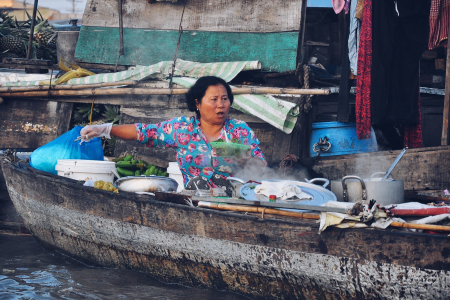