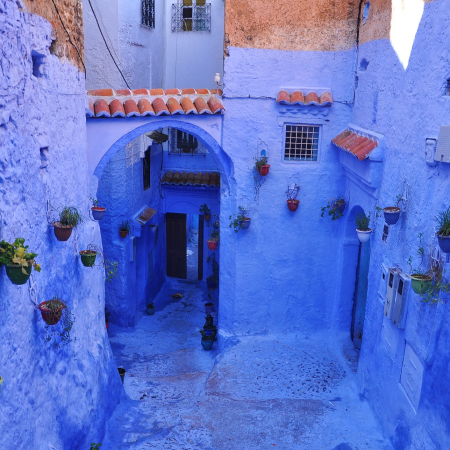 A few sparrows fly into the courtyard and trip on the mosaic tiles, which cover the floor of the inner garden of our riad. Rays of sunlight dapple the poufs, plants and tapestries as we listen to the chirping of the birds and the call to prayer by the muezzin whilst enjoying our breakfast.

The Moroccans are true rulers of regalia, masters of details, maharajahs of decoration, emperors of elaboration. Opposed to that are the beggars and merchants, the decay and the crumbling. Most fascinating to me, was discovering that the most grand mosques, private cemeteries and medersas are hidden away in the endless warren of streets and alleyways, not to be found unless someone opens one of the many gates and shows you this secret, frilled, majestical world behind it. Without the knowledge, only a bird would be aware of these large, splendorous buildings, between the thousands of tiny shops and houses.

In Casablanca we find this raw souk (market), no other tourists around, with many traditional scenes passing before our eyes: shoeshiners, young men drinking tea in barrows, men in djellabas playing a boardgame on the ground, their pointed caps marking their ring of players.

We pass some 'boulevards' with small shanties: dozens of barbers, changing over into multiple cycle repair shops, followed by a street full of carpenters. All this leads to the largest mosque in Morocco and the third largest in the world, also consisting of the tallest minaret in the world: the Hassan II Mosque. In front of it, I try to have a conversation with giggling schoolgirls in a mishmash of French, Arabic and English. The sun already setting, allowing all the silver and golden adornments of the basking building to glow to the fullest. Hundreds of pigeons fly in and out of the mosque through the holes between the flower- and star shaped mosaics above the huge doors.

We take the bus to Chefchaouen, in the Rif Mountains. On the way, a whole new side of Morocco seeps into my soul, while gazing out the window. Square buildings with dozens of parabolic tv antennas on top of them, like robots with curls, wave us goodbye, their colorful laundry like jewelry. We pass storks building their nests on top of the minaret of mosques, sheepherders with their small flocks, people on donkeys with waterbags, kids playing football, donkeys harnessed before carts. After being flat as a pancake for hours on end, the landscape turned mountainous. At night, we arrive, in waves of lights, we get picked up in a van that looks like an accordion pushed together, it drives us up the mountain so we can walk to our riad, where we arrive in a folk tale of One Thousand and One Nights. At the riad (a traditional house with a courtyard) we indulge in some mint tea, poured out of the silver teapot from high above the receiving glasses, with a hefty dose of sugar. At 5 in the morning, the call to prayer gets reverberated by the mountains, the echos multiplying the melancholy sounds rising from the mosques, the sincere singing converging.

We enjoy our breakfast on the roof terrace, before we immerse ourselves into the blue sea that is Chefchaouen. Browsing the medina you can not help but be completely enchanted by the exquisiteness and allure of this town; it is impossible to lay your eyes onto something different than loveliness. We arrive at the main square and even here, nobody's pushy, there's an ultimate relaxed vibe. We enter the kasbah, where it seems even more quiet, if possible; we hear the birds singing, there are blooming orange trees. We climb the defensive tower and take in the view all around, of the village and the mountains. Also inside the kasbah: the Centre of Andalusian studies and a former prison, where we imagine what it must have been like to be chained to these walls.

Late in the afternoon, we walk uphill along the old donkey trail, to the Spanish Mosque, from where we have a gorgeous view onto the sprawling town and we spot our roof terrace. For a while, we sit on the wall, watching the lowering sun turn all the blue & white into gold.

At night we make our way to the square, all walls and buildings now appearing lilac in the artificial light of the lanterns, for our last tajine meal in this rangy, aquatic city in the mountains.

The next morning, we walk over to a stream at the citygate at the foot of the hill, where the women wash large carpets and tapestries. Strolling to the busstation, we absorb all typical scenes; every shade of blue imaginable, the colorful arrays of babouches (leather shoes), berber women wearing traditional hats called a domme, sitting on low stools, selling green beans out of tiny brightly colored buckets.

We take the bus to Fez, again there's a pitstop along the way, at a shack by the side of the road, the large carcasses dangling inviting on the outside.

From Fez we take another bus to Meknes, where we discover that the so called Petit Taxi's drive on the meter and cost very little; for under 10 dirham (less than a dollar) it takes us to the main square, Place El-Hedime. We cross a part of the medina and find our riad in a quiet alley. Everything about it is so impressive, you can imagine the sultan lounging in the courtyard, smoking a shisha, his harem surrounding him. The roof terrace, the room, everything is just grand.

It is now Friday, the day of congregational prayer for the Muslims and the medina is quite calm, but still there is enough hustle and bustle to keep my eyes peeled. Through the drizzle, we saunter to the double city gate Bab Berdaine. On the way back we walk through the souk, where we see many a man weighing live chickens before selling them, next to all the herbs, fruit, vegetables and olives.

In the afternoon the weather clears, we pass the Bab Mansour citygate to the old imperial city, walking by the Royal Palace, to the Royal Stables by the waterbassin Agdal. The granary behind the stables is known as the Water Palace (Der el Ma). The stables are an amazing site, it was constructed to house no less that twelve thousand of the royal horses.

After this we visit the Dar Jamai museum, then cross the main square, where I see the snake charmers. Curious to see the snake come up from its basket, I wander too close and before I know it, have a snake wrapped around my neck, only to find out that this is the main attraction. Oh well, can't always be a smart tourist, now can you?

This contains only the first five days of our ten days in Morocco, you can probably relate to the sensory overload - so much illumination and finery, so much poverty, so much travelling back in time, while at the same time you can sense modern society creeping up on these scenes. 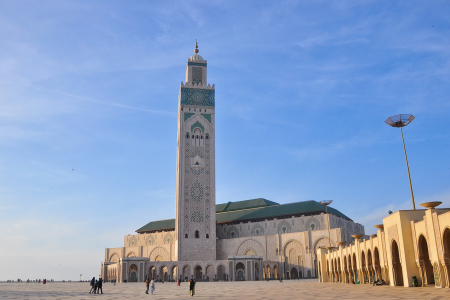 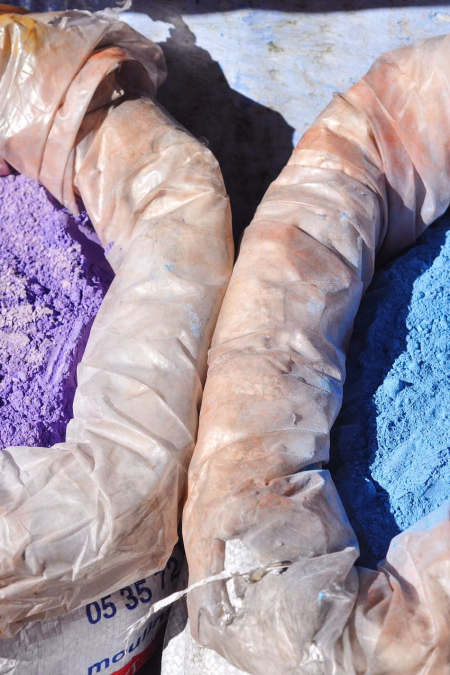 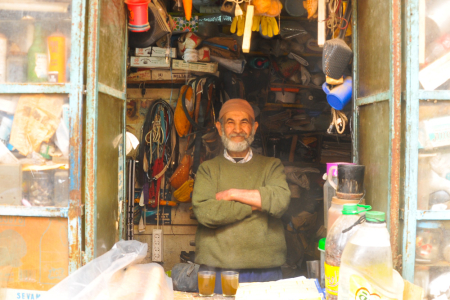