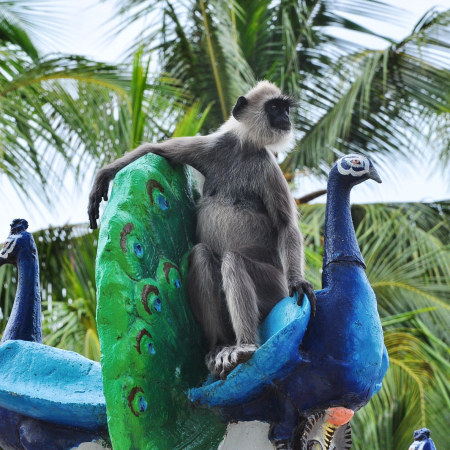 We started our worldtrip in Sri Lanka, which provides an excellent opportunity to get used to all kinds of transportation. During our first afternoon there, we'd taken a tuktuk (which fitted the five of us and all our backpacks!), the train and a bus.

I'm not exaggerating when I claim that Sri Lanka harbors the most maniacal drivers in all of Asia. Plenty of times we were thrown back and forth like we were in a tumble dryer, our arms functioning as seatbelts for ours sons, and to add to the hellish circumstances, the ever whining music reverberating through the bus. Often, the driver seemed determined to win an imagenary race, ride past everyone and everything he caught on the road, which one time prompted me to yell: a cow, a cow! Thank heaven the driver then knew how to push the break and the cow was wise enough to make a run for it, so we just grazed its tail. One thing is clear: all the guardian angels are superbusy at this side of the world, I witnessed more miracles here in four hours than in The Netherlands in a lifetime.

But as it goes with everything: you get used to it, so after an hour or so, I started to act almost as mellow as the local passengers, who just sat there, without batting an eye (although later on I found out they're terrified too, but too afraid to say anything; apparently bus drivers enjoy some kind of status here).

The boys didn't see any of the dangers. They were occupied looking out the windows, watching the stilt fishermen, waterbuffelos, ricepaddies, the driver spitting his chew tobacco out his window, hundreds of stalls with fruit, coconuts, brooms and all kinds of stuff, machines that are yet to be identified and small houses where people lived their daily lives.

Public transport: it is wiser to close my eyes and trust. Travelling these roads means: never a dull moment!

Staring out the window for hours on end, Arjan noticed all these Lanka Filling Stations by the side of the road. Of course the big, international gas stations are there too, but this is the local, charming one.

The most popular bird in Sri Lanka is the peacock, the sacred bird of the God Kataragama. Indeed we saw many in the holy village Kataragama - it's a pilgrimage town sacred to Buddhist, Hindu, Muslims and indigenous Vedda people. Also we spotted many of these majestic fowls high up in the trees in Bundala National Park.

It's no wonder one of the first sketches my love drew was a combination of this 'on the road' vibe and this beauty of the animal kingdom here. 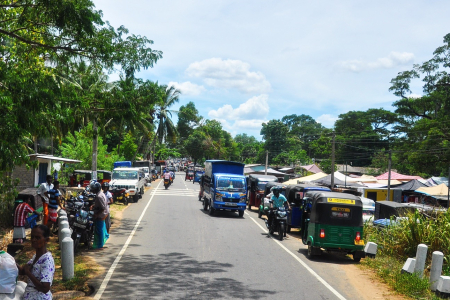